Though I am no longer an insect collector, I do from time to time put displays together, either for friends or to be used in my insect presentations at schools and libraries (for more information please click HERE). These are just a sampling of some of the things I have done. As additional displays are completed I will add to this blog. To get an idea of scale, I am using Presidential Display Cases that measure 24″ x 18″ x 2.5″. 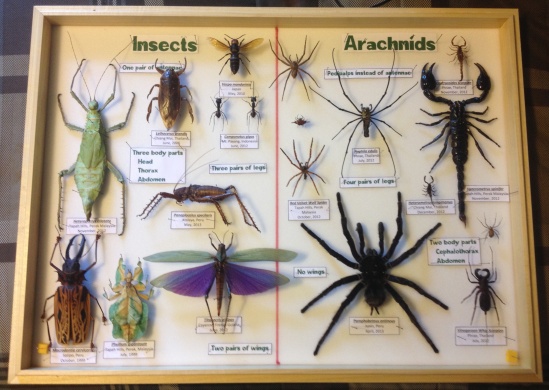 In 2013 I decided to totally revamp my insect presentations featuring all new displays to bring into the classroom. This was the first one that I did, featuring a side-by-side comparison of insects and arachnids. I am very happy with this display even though it is not jam-packed with specimens. It does feature a good assortment though of some of the largest species of both insects and arachnids, including one of the largest scorpion specimens I have ever seen!

This is the 2nd new display I did, featuring a side-by-side comparison of some of the world’s prettiest butterflies as well as some amazing moth species. The moths actually get a great reaction from the students as most people think of small brown or white moths when the word moth is mentioned. A lot of people don’t realize that there are some really spectacular species of moths in the world, not only in size but in color. I also like the fact that, with the exception of the Atlas Moth (Attacus atlas) all of the moths shown are actually from Rhode Island, giving the kids a reason to open their eyes and to check out what might be in their own back yard! 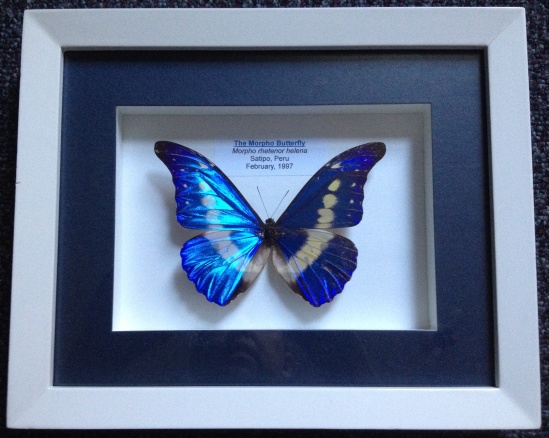 This is a smaller, 11″ x 9″, shadowbox display I did for a friend of mine. After seeing a portion of my collection she fell in love with the Morpho butterflies from Peru and Brazil and just needed one herself. So of course I chose to go with, in my opinion, the most spectacular of the Morpho butterflies, Morpho rhetenor helena! 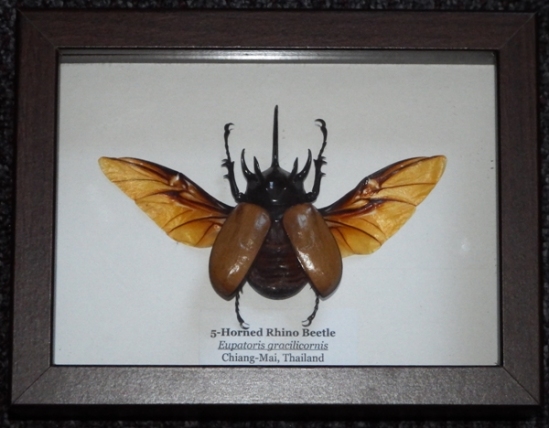 This beetle, one of the most popular of the rhino beetles, is displayed in a 5″ x 7″ shadowbox. Because these beetles are thick, the shadowbox needs to be deeper than the usual ones I use. This was a special order for a friend of mine, who wants to use it for a photography project.

CICADAS OF THE WORLD 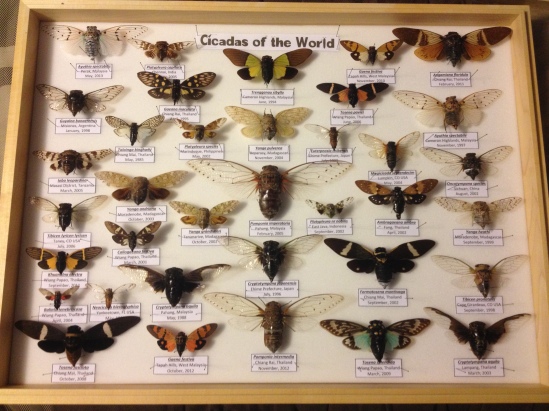 This custom display was done for a friend of mine. He is a huge fan of cicadas and though he already had a collection of the most readily available cicadas in smaller, individual shadowboxes he was looking for something more. He provided me with an idea of what he was looking for and I went all out for this display, featuring 36 of the world’s cicadas. In all honesty, I have never had so much fun putting a display together like this and it has inspired me a bit to do more displays, featuring a single family of insects.