The Glover’s silkmoth (Hyalophora columbia gloveri) is a smaller relative of the Cecropia moth (Hyalophora cecropia). This beautiful species can be found along the Rocky Mountains and the Great Basin from Canada to Mexico. 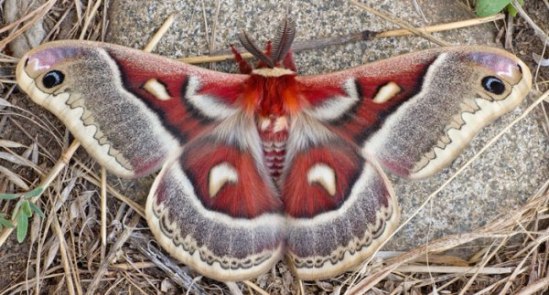 The ova of gloveri are typical of most Hyalophora species. They are large and oval with an indentation on the side. The overall color is cream with brown or chestnut markings. They are laid singly and in small groups.

The larvae look very similar to all Hyalophora species except they are slightly smaller, as the adult moth is also generally smaller than others in this group. They tend to be darker in color than those of Hyalophora cecropia but are still spectacular in their own right. The tubercules are also not as prominent.

The cocoons are significantly smaller than those of cecropia. They are very compact and light brownish-gray in color. The look as though they are made up of woven strands of silk.

The adult moth is typical of the genus in appearance though the overall wing color tends to be much more red than in other similar species. Overall the moths are smaller than the cecropia but what they lack in size they more than make up for in color.