I am always on the lookout for new and exciting tarantula species that I can add to my ever-growing collection. In 2014, one species in particular stood out for me…Monocentropus balfouri, the Socotra Island Blue Leg Baboon Spider. For the most part I have never had an interest in baboon spiders but this one certainly struck my fancy. First off, it is stunningly beautiful with its tan and blue coloration. Next, from what I have read, they are generally pretty docile, a trait not often found in baboon spiders. Then, since they live in a dry climate, their humidity requirements were minimal. Finally, word has it that they can be kept successfully in groups, something that is rare in tarantulas.

When most people think of tarantulas, they think of big brown ugly spiders. Yes, while there are many species of tarantulas that could fit this description, there are also many species in the world with not only spectacular markings but also breathtaking colors. Species like Poecilotheria metallica and Avicularia versicolor come to mind. Monocentropus balfouri is the first species in many years that really made me excited about owning! 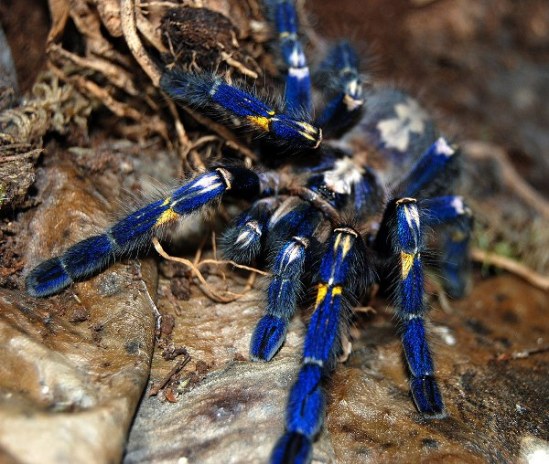 Baboon spiders, as a rule, tend to be very aggressive, making handling a problem. Though most people don’t handle their tarantulas, there are times when they must be transported from one container to another, either to clean out an enclosure or to put them into larger enclosures. This can be risky at times for tarantulas that are aggressive. Not only are they more likely to want to run and escape, they are also more likely to try and bite as well.

Socatra Island, off the coast of Yemen, is a very dry and arid location. Because of this, low humidity is not a problem for this spider. Many tropical species of tarantulas require higher humidity to survive. In a dry climate like where I live this can be a problem and must be created artificially by keeping the enclosure’s substrate constantly moist and by adding more heat. Humidity is also essential for a tarantula during the critical time when it sheds it skin, or molts. A species like balfouri will do fine with just the addition of a water dish.

Generally, tarantulas are cannibalistic, meaning they will readily eat each other when they come in contact with each other in the wild or in captivity. When keeping tarantulas as pets they are usually housed in their own enclosure, only coming in contact with others of their species if an attempt to breed is made. Even with mating, the males risk becoming a meal to the female.  Though some species of tree-dwelling tarantulas, like Avicularia and Poecilotheria, have been successfully kept together in groups in large enclosures, these spiders require a lot of room and space between each other and must be kept well fed in the hopes that they don’t eat each other. It is rare for a ground-dwelling species to live communally but this species does and other keepers have had 100% success in trying this. Another interesting aspect of this species is that the babies, once hatched, spend a good amount of their time with the mother! In most cases, tarantula babies leave the mom soon after hatching as they can quickly become meals to not only their mother, but also their brothers and sisters as well. From what I have been reading, balfouri spiderlings actually benefit by staying with mom and she has even been known to feed them, providing pre-killed and crushed food that they can suck the juices from.

So this is a record of my attempt at this, featuring three Monocentropus balfouri spiderlings. I bought them from Paul Becker at PetCenter USA and received them on April 8, 2015. Since the spiders I bought were only just over an inch in leg span, I opted for an enclosure measuring 8 x 8 x 14″ (with the intention that down the road they would need to be transferred to a bigger enclosure). This enclosure was purchased from Jamie’s Tarantulas.

Upon receiving the enclosure I filled it with approximately 3-3/4″ of substrate (a mixture of peat moss and Eco-Earth, a commercially available substrate found in most pet stores). As can be seen in the photo, I went as deep as I could with the substrate before the breathing holes would cause the substrate to leak out. I then made three burrows with my finger, covering each with a piece of cork bark. Then I added a water dish.

I made sure that the enclosure was set up well in advance of the arrival of the spiders. When they did arrive, as always Paul did a tremendous job of packing everything to ensure safe arrival. I actually wonder how Paul is able to pack rolled toilet paper into these small plastic vials, creating a cushion for the spiders while in transit, the way that he does and to still be able to get the spider inside! I carefully unpacked each spider, one at a time, and they all calmly walked over my hands before being put into their new home.

Once inside, for the first few days, the three spiderlings would spend most of their time on the sides of the enclosure. You would never guess that these were not arboreal spiders considering how much time they actually spent not on the ground! As time went on, they started to spend more time on the substrate and it wasn’t long before I started seeing little webs that they were making. Though they did not utilize the burrows that I created, they certainly seemed to like the cork bark as they could often be found sitting underneath it. 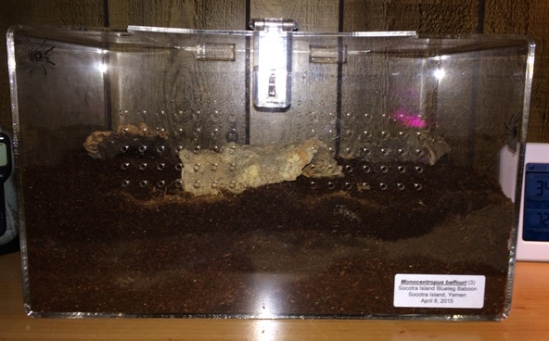 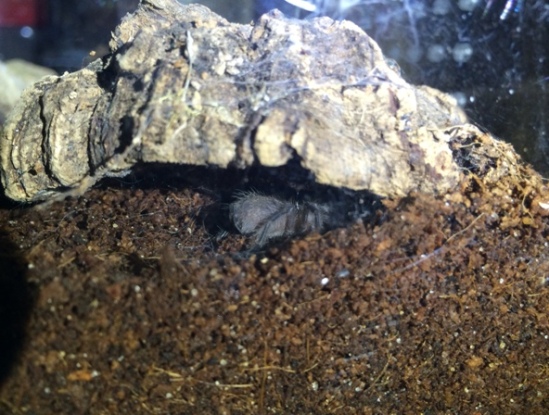 April 11, 2015: I have yet to see any of these spiders feed. That doesn’t mean that they haven’t, only that I haven’t witnessed it. There has been no signs of aggression at all towards each other and two of them actually seem to spend a lot of time together under one of the pieces of cork bark.

My plan is to now add to this blog regularly, updating on anything new that happens. Please check back often to see how things develop!

April 24, 2015: As of today there has been little change though one of the three spiders successfully molted. Since I am assuming that all three are from the same egg sac, then the other two should be molting soon as well. For the most part, all three spiders have taken up residence under one of the pieces of cork bark and have created some nice entrances and exits on either side. There has still been no signs of aggression towards each other and on occasion one or two can be seen walking around the sides of the enclosure. Because they have started to web up their new home, I will no longer be lifting the cork bark to check on them. 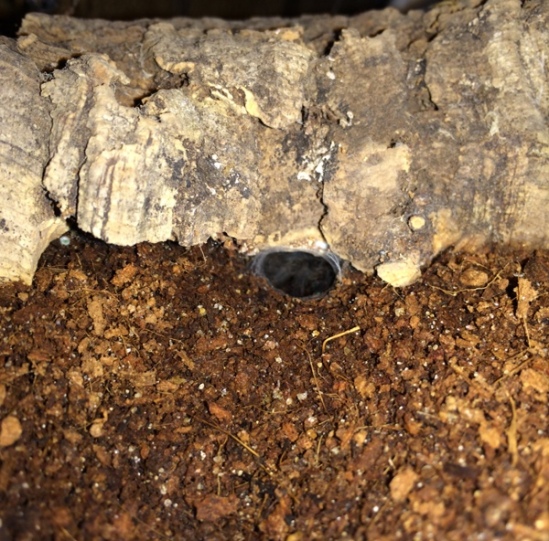 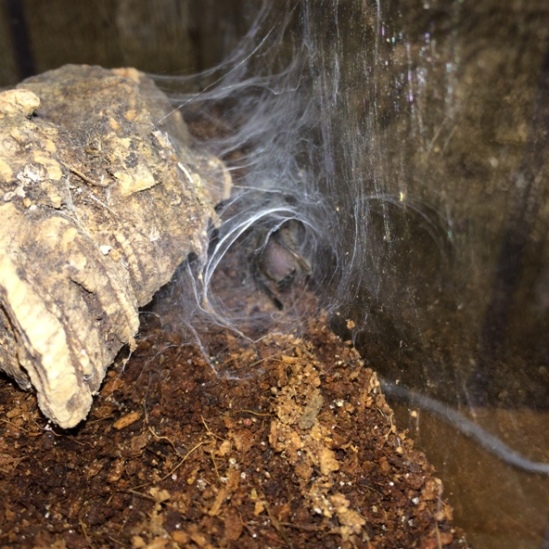 May 2, 2015: Not much to update this week other than these spiders have continued to show the web-making capabilities, expanding and thickening what was already there. A second spider also molted. Though it is difficult to see, in the first picture the spider is on its back and in the second picture, the molt is complete and the spider is right-side up, resting. 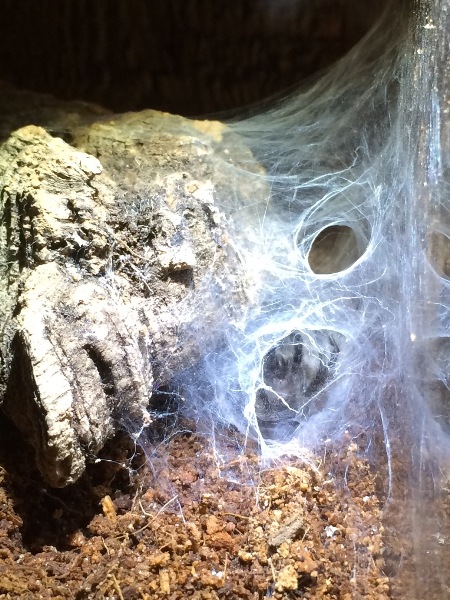 May 16, 2015: Though I have yet to still see any of these guys eat, they have all molted and now all three can readily be seen at the entrance to the burrow, regularly hanging out on the side of the tank. To me this was huge because for the most part, I only saw two at any given time, not knowing if the 3rd had become a meal for the other two.

August 15, 2015: There hasn’t really been much to report since the last entry. All three spiders seem to spend most of the day hidden in their burrow but at night, most can be seen out, wandering around the tank. They have almost doubled in size since I received them and now can be seen actually eating (whereas before all food consumption was done hidden inside their burrow). Here are some recent pics (I apologize for the poor lighting)! 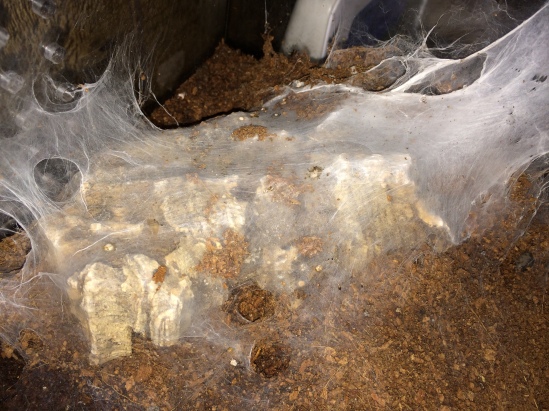 These guys are extensive webbers, as seen in this last photo. You can also see the various entrances and exits that they have created!

February 25, 2017: Unfortunately free time has been rare for me so updating this post as often as I had hoped was not possible. Since my last post one of the three tarantulas has disappeared, either by being eaten or natural death. Either way I never found any remains. From what I have read, if an individual dies naturally it will be removed from the burrow so I am guessing it was devoured. The two remaining seem to be doing well and are often seen hanging out together on the side of the glass, especially in the early morning and early evenings. Here are also a couple of recent pictures so that you can see their adult colors. 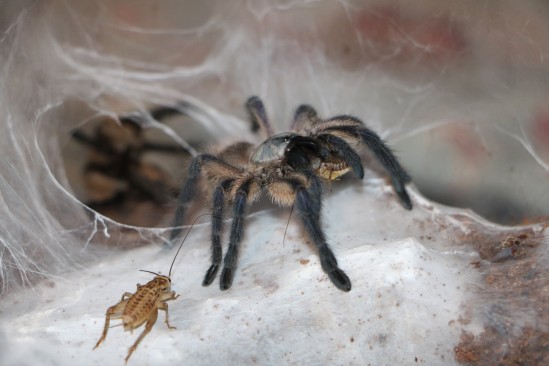 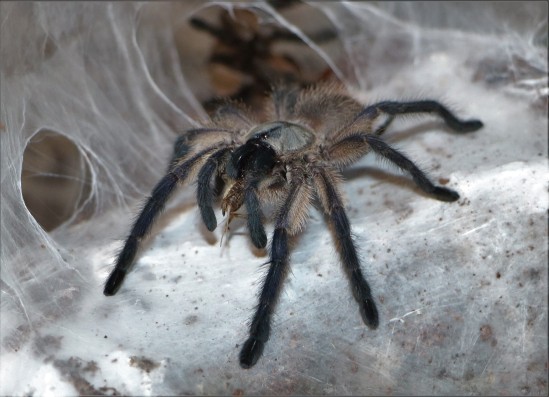